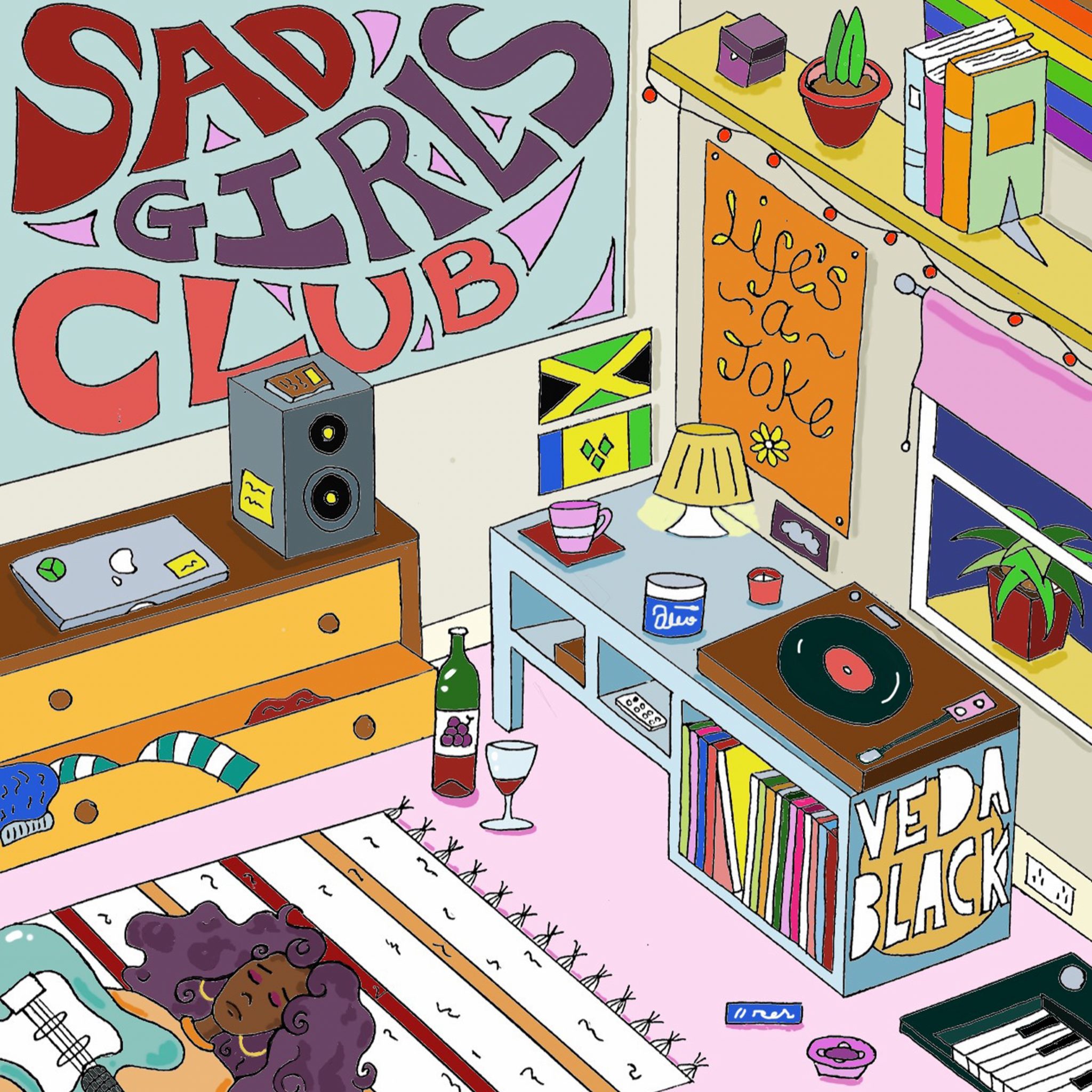 The EP starts with the title track, “Sad Girls Club”, a sombre, minimal introduction to a 5 track project. The first track is like an invitation, it documents the longing for companionship with like minds and offers a safe space to exist and be with others, no commitments or expectations, just self. It is almost like Veda is letting others know that they are not alone and in fact, they can find some comfort within the music to come in this EP.

Track 2, “Serious” is one of my favourites on the album, it’s a beautifully recorded track with the opening harmonies being reminiscent of Hiatus Kayote’s ‘Choose your weapon’ album. The simple guitar strum accompanied by a very subtle bass gives me the feeling of being an open field under clear blue skies, watching an amber butterfly dart across tall green blades of grass.

There’s a heavy feeling in the bass as the song progresses and intensifies, documenting the subject matter of wanting love to be reciprocated and taken seriously. It’s a song of two parts, the final quarter introduces the drums and Veda’s vocals go up an octave after a soothing moment of vocal exercise and harmonies. I experience yellow tones and citrus scents, almost awakening the senses with her piercing range in the latter part of the song.

“Call It love” is the next song, the lead single from the EP which caught my attention upon first lesson. It encompasses a sound that is emerging amongst British soul artist which infuses funk and soul sounds, artists such as Mary Sho and Sault are one’s to mention who are dabbling in this  bass-heavy, funk-soul vibe.

This track is a really beautiful unravelling, a realisation that the feeling connection between Veda and another could be love. Hearing Veda explore these emotions might be familiar to some of us. I have experienced myself falling for someone, while trying to maintain control of my emotions – for the most part it doesn’t work! It’s almost like once we admit we are in love, it’s harder to run. There is something very grounding and affirming about the expression of love in this track.

Track 4, “Several Coffees Later”, is a documentation of being lovestruck with someone who completely rocks Veda’s world but is self absorbed in an admirable way. As an artist, the art often comes first, but how does this play out when there is a love interest involved? The track describes a feeling of being in awe and infatuated by someone, yet not really knowing how to express it verbally.

“I’ve got something I need to say

As I try to gather up my thoughts”

“Several Coffees Later” seems to suggest a process of time passing while and still being in the same place, not knowing what to do or say? This is another one of my favourites as the melody is simple but the harmonies are layered and structured in a way which makes me feel like time doesn’t exist!

The final track “Only You”, has a very calming tempo and lyrics written ever so intricately, offering reflection and understand as Veda explores the difficulties in wanting to connect with another person while also holding onto fears, barriers and trauma from past relationships. It is a sombre track, reminding me of rainy days and hot chocolate by a fireplace. The scents of vanilla and oak come through with the colour of brown, earth tones I get while listening to this. A great way to end the project which seamlessly blends back into track 1 if left to repeat!

Veda’s openness about her love journey is beautiful to see as often times, queer artists aren’t heard unapologetically in their fullness. She plays with the various concepts of polyamory, sexuality, vulnerability and more within this project which documents where she is with her identity. Not only is the EP sonically soothing, it fleets between genres such as Funk, Soul and RnB, which is a testament to Veda Blacks production style.

Listen to the EP here: